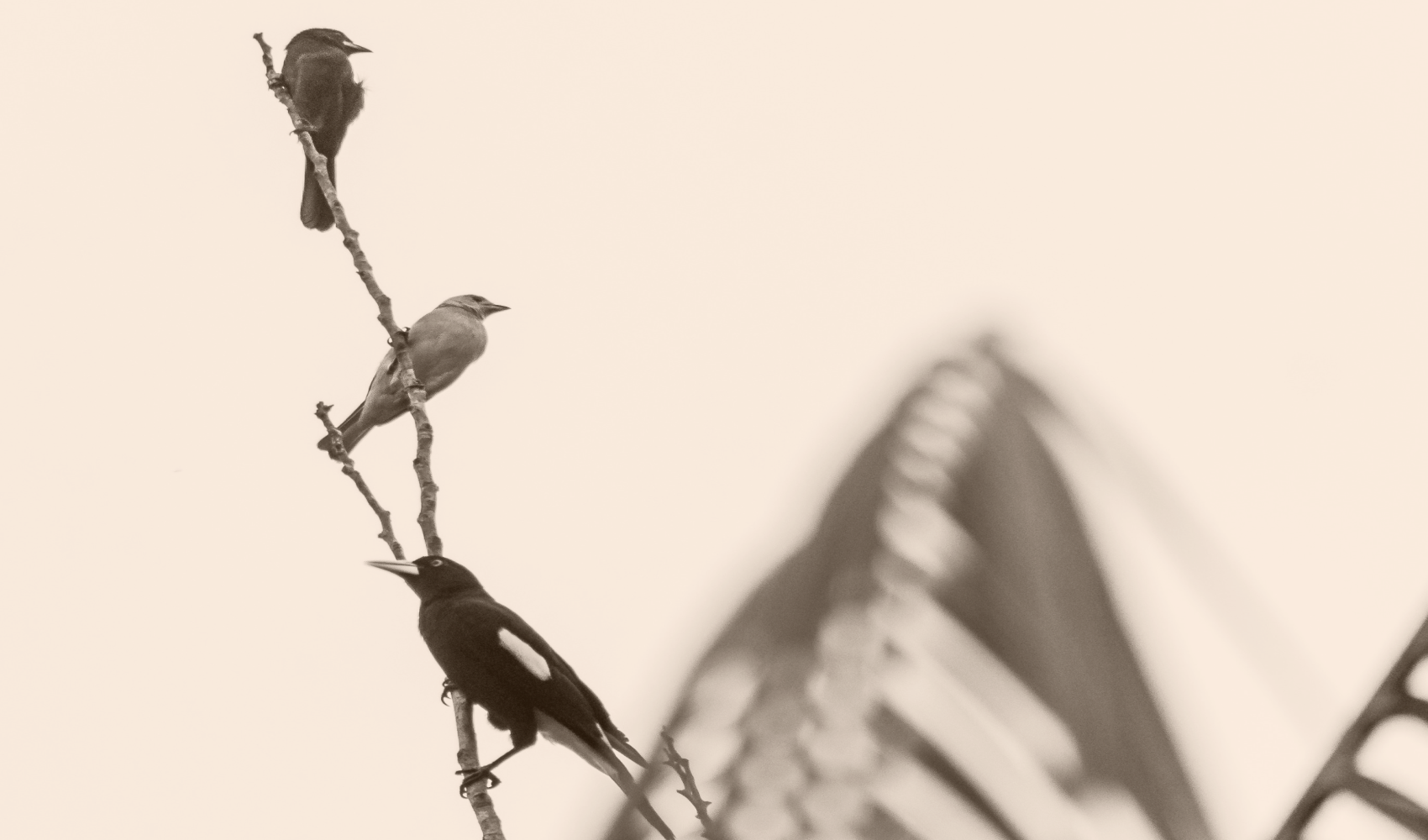 In February 2022, the Intergovernmental Panel on Climate Change (IPCC) shined a light on the strong interconnectivity of ecosystems, biodiversity and human systems. Its report Climate Change 2022: Impacts, Adaptation and Vulnerability outlines many ways in which we depend on nature.

A diversity in flora and fauna is essential as they interact in balance with each other to sustain each other.

How do we know we're in a state of biodiversity crisis?

Extensive research has shown that biodiversity is in rapid decline.

But what is the role that companies are playing in this biodiversity crisis? What can companies do to connect their net-zero commitments with protecting biodiversity?

To answer these questions, we first need to understand:

Biodiversity covers the variety of all living organisms (mammals, fish, amphibians, fungi, plants, bacteria etc.), including the variety in species, between species, and ecosystems.

How is it essential to sustain a liveable planet?

The IPCC Climate Change 2022: Impacts, Adaptation and Vulnerability report confirms this correlation. Due to the limited capacity of ecosystems and biodiversity to adapt to climate change, it will become much harder to restore them beyond the 1.5°C global warming. These changes can cause irreversible damage.

Therefore, both governments and companies must all be paying more attention to protecting our planet’s ecosystems and biodiversity. 30-50% of the earth’s land, freshwater and ocean habitats need to be restored and conserved for nature to be able to absorb and store carbon.

Mangroves – for example – typically grow in salty or brackish waters. There they provide natural habitats for both terrestrial and aquatic life and they are known to protect coastal areas against eroding. Mangroves have diversified up to around 70-80 different species each uniquely suited for the ecological environment they are growing in. This means that one mangrove might not be able to survive in another area.

How is it interconnected with climate change?

However, climate change, drought and the rising sea levels are threatening mangroves as they need a certain amount of water, not too much or too little. This is unfortunate, as a patch of mangroves can sequester up to 10 times as much as a similar size patch of terrestrial forest. Their existence could therefore be an important contribution to the fight against climate change.

This is only one example out of many that show the vicious circle of climate change and biodiversity loss. Its consequences advocate strongly for restoring healthy and resilient ecosystems.

Climate change threatens this balance in ecosystems because they have an ecological and atmospheric boundary – or a so-called biospheric tipping point – in which actors thrive. A biosphere tipping point represents the temperature threshold at which the global land surface will switch from carbon sink to emitting carbon.

Companies in various industries - such as mining, global food supply and fashion - still receive international finance to perpetuate this practice. Moreover, links were found for 45% out of 30 analysed types of ecological regimes shifts in physical climate and ecological systems.

These links show that crossing the biosphere tipping point of one system may also increase the risk of reaching the tipping point in other systems. For example, with the wind and water circulation of our planet, the melting of the Greenland ice sheet can affect these streams. As a result, it can destabilise the West African Monsoon which instigates more drought.

What can the public and private sectors do?

Now that we have covered some of the doom and gloom figures, we need to understand how we can clean up the mess we are making. We are talking politics and investments.

As part of the EU Green Deal, the EU has adopted the Taxonomy Regulation which came into force in 2020. This piece of legislation aims to ensure fair competition and legal certainty for EU companies. This regulation forms the basis for the EU Taxonomy, a classification system establishing a list of environmentally sustainable economic activities. One of the environmental objectives is the protection and restoration of biodiversity and ecosystems.

International and national policies are guiding investments toward protecting and restoring our planet’s ecosystems. Investors will increasingly be encouraged to understand the nature-related risks for the purpose of decision making in asset allocation. The Taskforce on Nature-related Financial Disclosures (TNFD) is working toward a framework to help organisations identify risks end set biodiversity targets. It includes a disclosure framework, which will guide financial institutions and other organisations to identify nature-related risks and opportunities.

With this knowledge, the private sector can effectively mitigate the risks and reap the opportunities to become a positive force. The TNFD draws its standards from the recommendations of the Task Force on Climate-related Disclosures (TCFD) when it comes to the core elements of disclosure: 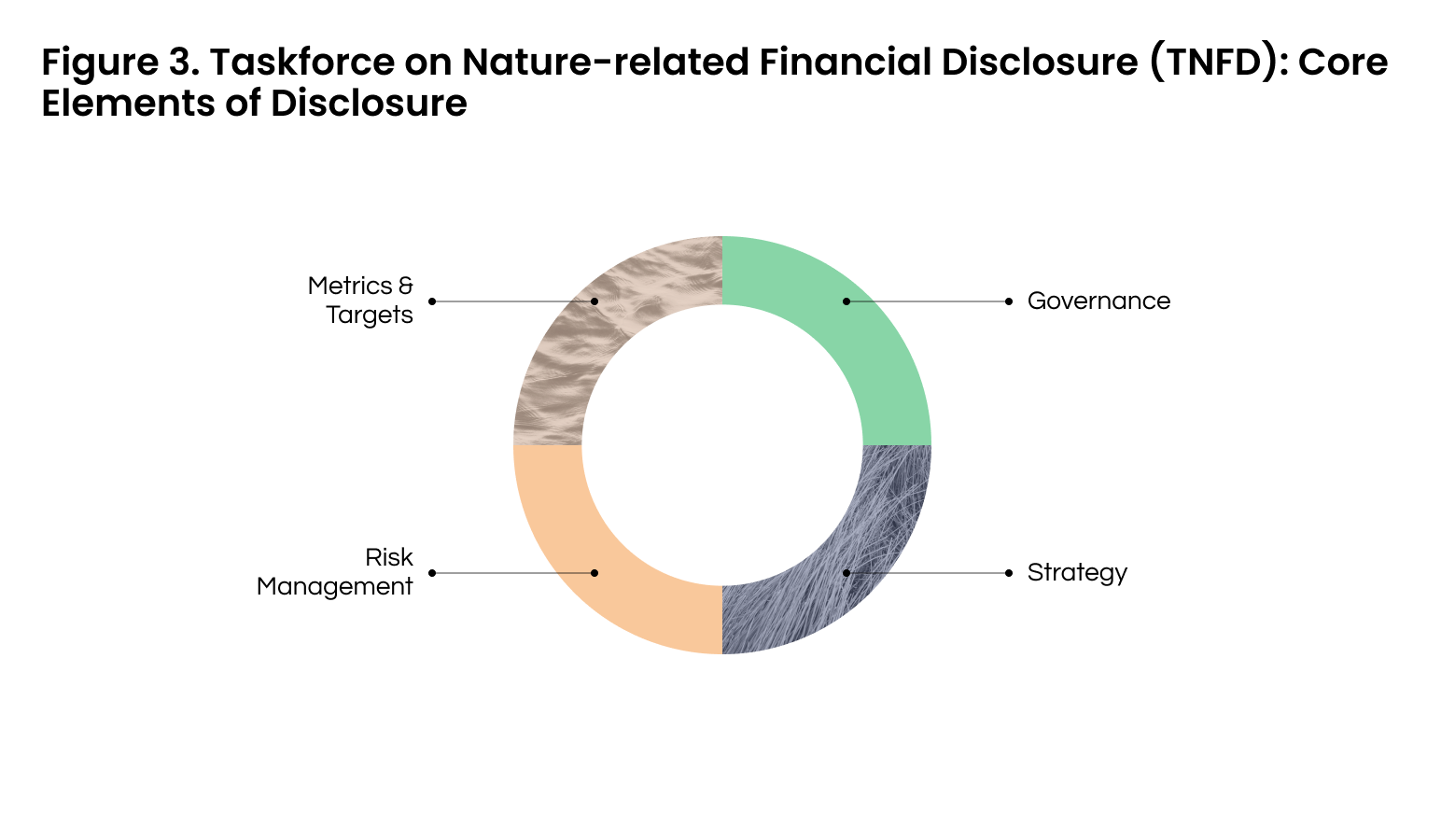 In each of these core elements, organisations are expected to elaborate on:

The TNFD standards are intended to be integrated with other existing reporting standards and frameworks such as the GRI, SASB, etc.

This framework is expected to be released in 2023. However, the beta version of the TNFD framework was released in March 2022. First, financial institutions are requested to test it, complete risks assessments, and provide their feedback.

Chief executives of various financial institutions such as ACTIAM, BNP Paribas, Barclays, KPMG as well as Robeco have already endorsed the TNFD recommendations.

We advise organisations to follow the updates and map out the nature-related risks of your organisation and its supply chain. This information is key for appropriate corporate response in terms of sustainability strategy, agenda and action plan.