Rooted in the European Green Deal and consistent with the Paris Agreement is the EU ambition to become a climate-neutral economy by 2050.

Signatories countries of the Paris Agreement are requested to disclose their long-term emission reduction strategies starting in 2020 and make clear their contribution to the achievement of the Net-Zero goal.

Close to nations, corporations and other organisations are also involved in assuring climate action.

As shown in Figure 1, from 2019 to 2020, the number of companies with net-zero targets nearly doubled.

However, the quality and credibility of these commitments have generated discussion because of a lack of verifiability. Without adhering to a common definition, targets can be inconsistent and their impact limited.

Indeed, the latest UN Emissions Gap report points out that current climate commitments put the planet on a 2.7°C pathway by the end of the century.

Therefore, the SBTi has developed the first global science-based standard for companies to set net-zero targets.

But before diving into the new Net-Zero Standard developed by the SBTi to enhance clarity and uniformity around climate action, we address the meaning of Net-Zero transition.

All words that are exponentially gaining momentum in the business realm.

These terms are often used interchangeably by organisations to present their commitments against climate change.

Briefly, Net-Zero refers to a condition of equilibrium between the amount of GHG emitted and the amount taken away from the atmosphere.

It represents the preferable way to halt climate change by reducing global warming while being realistic.

Indeed, it wouldn't be reasonable to pursue a Gross Zero target because our society relies heavily on activities that generate emissions. While Gross Zero would entail stopping all emissions, Net-Zero tackles climate change by removing from the atmosphere the inevitable GHG produced.

The flexibility of these concepts reflects the uncertainty and complexity in verifying the credibility of the climate goals pledged by companies. To give more structure and standardisation concerning climate action, the Science-based Targets Initiative (SBTi) has launched the Net-Zero Standard, the world's first framework for net-zero target setting consistent with climate science.

3. The SBTi and the New Net-Zero Standard

The Science Based Targets Initiative comes from a partnership between CDP, UNGC, WRI, and the WWF launched in 2015.

Its role consists of setting and promoting best practices in emissions reductions and net-zero targets in line with science.

Over 2.000 companies worldwide are taking climate action according to SBTi's methodology, which involves the following steps:

As depicted in Figure 2, SBTi companies are following a trend of emissions reduction compared to the global emissions trajectory.

At the end of 2021, the SBTi has launched the Net-Zero Standard: a reliable and independent framework for corporate net-zero target setting.

Through the Net-Zero Standard, companies develop near- and long-term climate action plans consistent with the 1.5°C increase threshold.

The Net-Zero Standard also plays the role of guarantor of the credibility of these pledges to stakeholders by setting in place a robust certification mechanism.

Therefore, corporate Net-zero targets are structured as illustrated in Figure 3. In the following paragraph, we will explore the four elements in more detail. 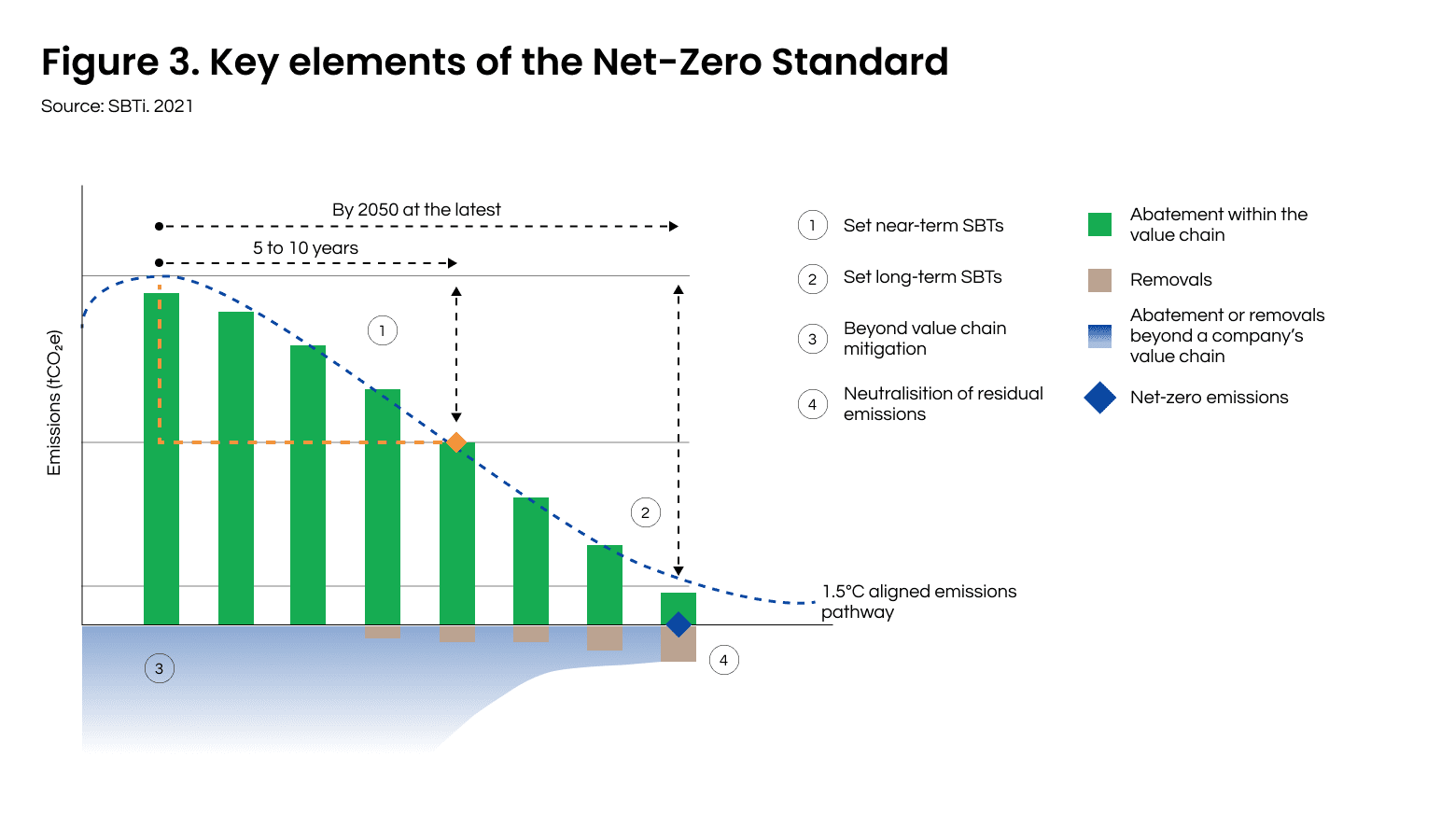 5. How to set Net-Zero targets: developing a net-zero strategy

Once a near-term target date is reached, new near-term science-based targets have to be set along the long-term reduction trajectory.

Long-term targets refer to the emission reduction needed within the value chain to reach net-zero by 2050 on the 1.5°C pathways.

Companies should widen their climate efforts outside the sole value chain by taking on emissions removal/storage actions.

According to the Standard, most companies should curb their emissions by at least 90% through their long-term targets. The remaining emissions must be neutralised to balance out the amount of GHG put into the atmosphere.

The SBTi recommends a 5 step process to set science-based targets:

The new Net-Zero Standard finally fills the harmonisation gap in climate voluntary commitments. It represents an opportunity for companies to define science-based emission reduction strategies. Moreover, it allows them to communicate their climate pledges to stakeholders with credibility and transparency, taking a step ahead of non-disclosing competitors.